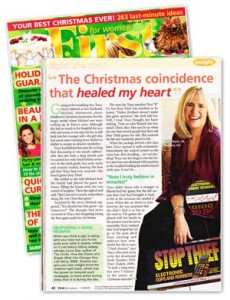 For a child is born to us, a son is given to us. The government will rest on his shoulders. And he will be called: Wonderful Counselor, Mighty God, Everlasting Father, Prince of Peace.”  Isaiah 9:6, NLT

I want to share with you some exciting news and give all the glory to God because it is through His favor and love that First For Women Magazine has published an article about my “Christmas Miracle” devotional. It was freelance writer, Diane Nichols who after reviewing hundreds of stories, stumbled on my “Christmas Miracle” devotional, written over three years ago, on my website. Diane has told me that finding my miracle story was like finding a needle in a haystack, but as soon as she read my story, she knew it was the one for their December issue. You can pick up your copy of my story in First Magazine (page 42) at your local grocery store or newsstand throughout America and Europe.

The thing is friend, if God can do this for me…then what will he do for you?  It is my prayer that you will have a miracle filled Christmas this year!

Here is the full, expanded version of “My Christmas Miracle” published in 2006

Prayer: Lord, I declare that the enemy must give back everything he has stolen from me! I proclaim that 2010 will be a year filled with the restoration power of God. I ask that you restore my body, my mind, my spirit, my relationships, my family, my reputation, my finances and anything else needing the restoration power of God. I love you Jesus and it is because of your love that I believe 2010 will be a year crowned with Your goodness and dripping with abundance (Psalm 65:11).” Amen.